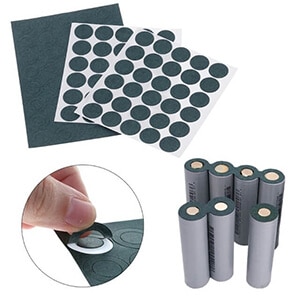 The function of the brown high-temperature tape is to stick the positive and negative ears after welding to prevent it from touching the pole piece after it hits the shell.

The role of masking tape is to stick the outside of the aluminum shell for protection.

The double-sided adhesive tape is used to fix the position of the tabs of the flexible battery.

Adhesive paper (double-sided tape) plays a role in fixing the battery core and the rubber case, ensuring the shockproof performance of the battery.

Sponge pads have similar functions to barley paper and are generally used between the protective board and the battery core.

High-temperature glue is generally used in the part where battery hardware and battery core are insulated.

We are adhesive materials and whole set solutions provider in China.

We provide standardized adhesive tapes as well as customized services from coating to die-cutting.